Four Hives of Golden Girls (and Some Fat Drones, Too) 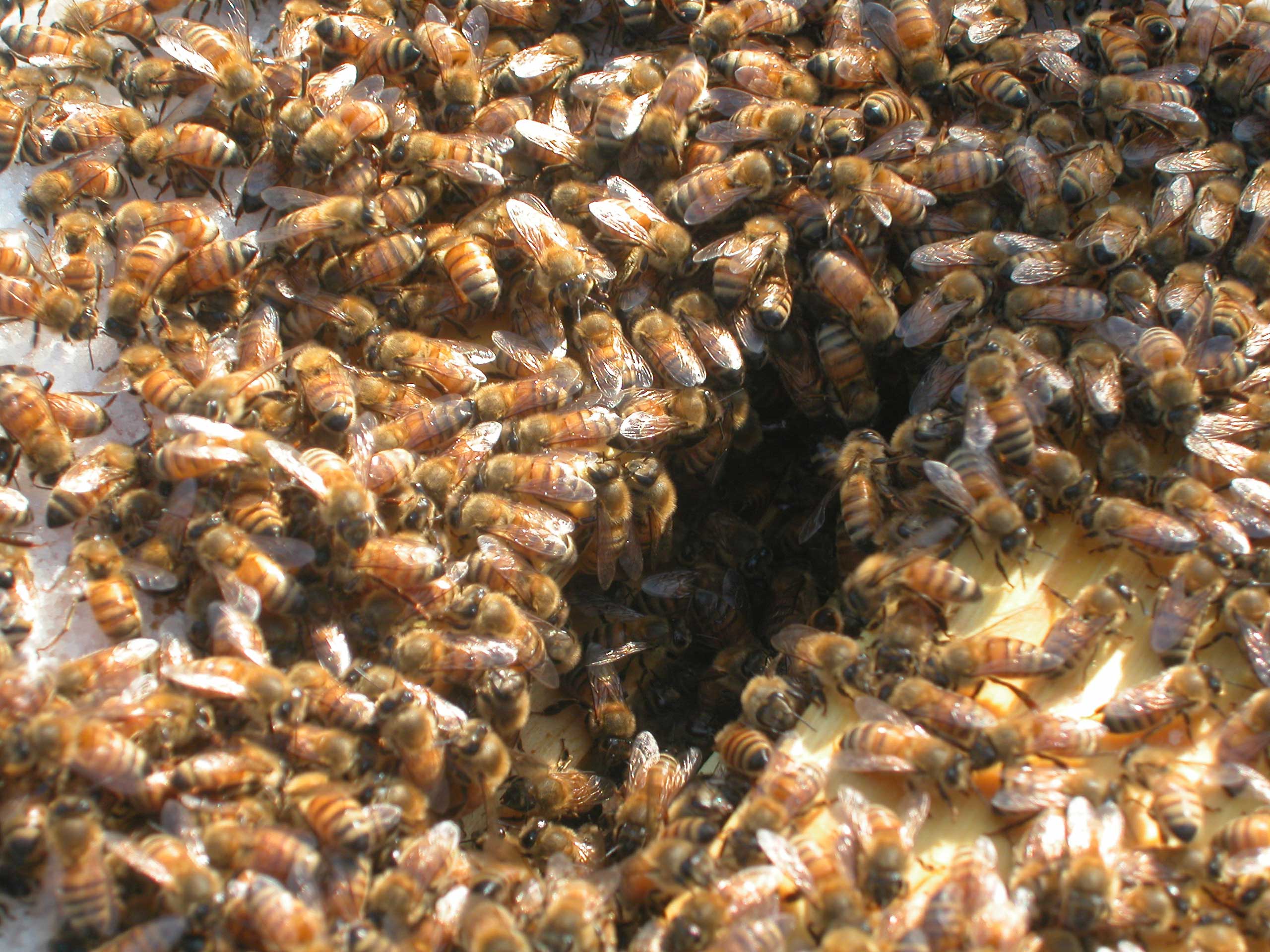 Let's confess this up front: I did not want to visit my hives today, because it seemed inevitable that the news would not be good. MaryEllen lost a hive yesterday, and she found out that 10 of the 12 hives at the University of Delaware had also perished. This truly bent me out of shape, because I went to a talk by the UDel head apiarist last Fall, and he appeared to be doing everything right as he tucked his bees in for the Winter. I know I did not do as much, so I feared that Twain and MaryEllen-the-Beehive might be dead. 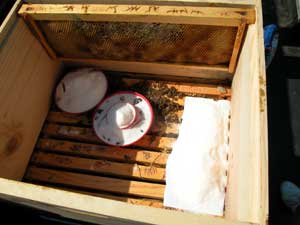 But, my dear friends, I cannot tell you what it does to my heart to see all those thousands of golden girls still buzzing! The bees were clearly in flight this morning, because my yard was full of scouts, looking for blooms. That meant one of the roof colonies was certainly alive, but could I hope for both? Well, the photo on the left shows the top of the cluster still peeking out at the Twain hive, and there were not very many new dead bees around (I have not been showing you the pictures, but since the worst of the cold snap ended, I have removed thousands of bees from in front of Twain, and have taken photos at one day intervals to see if a crash — like the one at the Mill — might be taking place).

The Wilde hive has finally risen up to the top box, and those girls are nibbling sugar, too. I had taken away all the feeders with 2:1 sugar syrup a week ago in order to better monitor bee death around the hive, but the bees found those feeders (at the other end of the roof) and were thronging them today. I set out some sugar water downstairs in the yard, too. 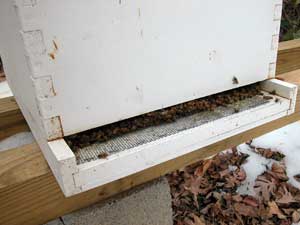 At the Monastery, I had grave fears for the MaryEllen colony. Their hive entrance had been almost stopped up with dead bees when I visited there last week. I cleared it, opened the entrance reducer a bit more, and gave them additional dry cane sugar (they had eaten a bit). Then I officially began to worry. It's hard to know exactly when worrying is warranted, especially since I do so much of it here. I tried to remember that, during the cold snap, the bees could not clean their home: they would have had to leave the cluster of warm bees to do it, and would have died themselves. Therefore a few weeks of deceased bees had piled up. What is too much? Only Spring can tell. 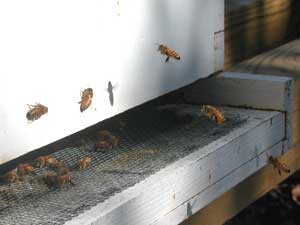 But today, I took the picture (way) above of the bees in the Doug colony, munching sugar for all they are worth, as well as this shot of the MaryEllen bees lining up for landing (like jets following I-95 to Newark...) packing pollen in three colors (one willow-grey, one maple-yellow, and one mystery-neon-orange). The Doug hive is clearly stronger, but I think there is reason to hope they both will make it.

And let us take a moment here to say "All hale the fuzzy male!" Why? Because every few minutes, a fat and furry drone would make his way to the hive entrance, and fly off to cruise queens. Somewhere out there is a Drone Congregating Area (a DCA), literally a great 7-11 in the sky, where willing males with not a whole lot of impulse control seek female joy. I'm going to read up on DCAs, and see if I can find any in the city.

There certainly are a lot of pictures today, but I just want to show you how the Doug hive got more sugar today. You saw above that the bees were thronging, and just pouring sugar on them could bury the poor buzzers. So I sprinkled sugar over them to make them retreat, then I filled in the empty areas with more sugar. The final picture shows you bees eating sugar at the MaryEllen colony. It looks like ice and snow, but it is bee-bitten sugar lace. 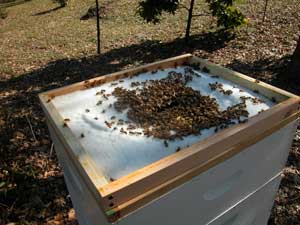 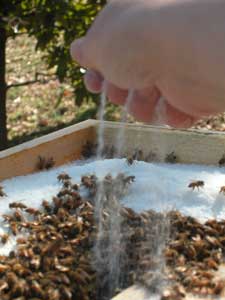 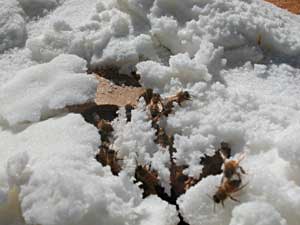 We are not in the clear, but now hope seems like a much more plausible, and pleasurable, way to pass the late Winter.

When some people arrive at this page via search engines, I can sometimes see the query which brought them here (sorry if that freaks anyone out). Lately, several poor souls have arrived here on the the heels of the search term, "bee death." I am sorry to welcome you, fellow beekeepers, to a woebegone club.

Today we investigated the death of the colony I keep, alongside one of my friend MaryEllen's, at a historic mill site. It's important to do this in order to determine whether a disease was present that could affect others; to learn what mistakes might have been made that could result in the death of other colonies managed in the same way; to decide whether any of the equipment or comb can be used again or rather should it be sanitized or discarded; to secure the site against possible robbing out by healthy bees; and to clean up the dead.

To see a more extensive explanation of what we found, you can look at a bunch of photos and a narrative on the sidebar at right. But here's the short version.

My bees froze to death. They need each other, in the thousands, during this cold, hard time of year in order that each individual flex her tiny muscles and contribute that warmth to the whole. When we popped the top, I expected to see thousands of dead bees, because I am seeing many many many dead bees at two other hives, and fear the worst there. I expected to see those thousands with their heads stuck into the bottoms of empty cells, starving because I failed to feed them enough, or ensure that their stores were close enough by — a mere 2 inches in the coldest weather.

However, what we found was a clean hive, with just a few dozen dead bees on the bottom board, and just a few hundred clustered around each other, not able to hold off the cold.

We looked for signs of disease, and some were there. There was an instance of chalk brood, but that is a disease of weakened colonies, not one that brings them to their knees. There was no AFB, but there were dead larvae in cells with no wings. There were thousands of dead mites on the bottom of the hive, and they were stuck like fleas to dogs on the poor last bees standing.

The picture here is not a good example of what the remnant cluster looks like — you can see better on the sidebar — but it does show the limit of what I could do for them. Those bees are on a frame full of nectar, and the last thing they saw on this Earth was each other.

Varroa mites seek a symbiotic relationship with the bees, but they kill their would-be partners with their vigor. And then they, too, die. It's hard for me not to think of humans and our demands on the planet, as well as the limits on what we can do for other creatures once balance is gone.

When confronting the death of these bees, I approached with too much of a sense of being at the center of responsibility and blame, because I never had that much control and power. Knowing what I do now about the mites, and about the almost sure death of the Mill bees, I think I should have considered other alternatives, including the use of pesticides. But those are blunt tools in clumsy hands, too, and such violently lively mites might best be escorted out of the picture at the cost of one colony of bees. But I will never know, or at least need much more time to learn, before I have the kind of wisdom that will tell what should live or die, and whether I should make it so.
Posted by Phang at 6:03 PM 3 comments: 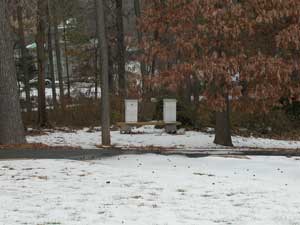 Bernd Heinrich, a famous naturalist, once spent part of a winter standing in front of beehives, trying to figure out how the honeybees knew that it was safe to fly. In a parallel of the story of Noah (who released doves to see if his particular time of stress was over, until one came back with an olive leaf), it turns out that the bees send out an emissary from time to time, as well. In the case of the bees, though, the adventurous workers fly out in singles and groups, and if the weather is wrong they do not come back. Nature sacrifices a bunch of bees, one or two at a time, in order to find Spring.

Nature also sacrifices entire colonies, which is what has happened at the Mill. Today was check-on-bee-feed day, and MaryEllen helped me out by checking out the bees out in the 'burbs. Hers are not doing well, and mine are dead, or so I learned on the phone. She was terribly sorry to tell me, and is not sure what happened, other than a population crash. She says that the cluster of bees is still there, inside the boxes, and that there is still lots of honey in there, but that they are all dead (oh what a beautiful, fantastic Queen to go so young). I know they were there two weeks ago, before this cold snap, but I also know that there were probably ten thousand mites by now, too. And now all are dead, a result of a would-be symbiotic relationship (between mite and bee) gone terribly wrong. Or so I think. The hive is now sealed, and after a bit more melting, we will go in to learn more.

You cannot be a beekeeper without losing a hive, or so I am told, and have repeated to myself a bunch. The state beekeepers meeting last weekend included a talk by a government apiary inspector, who estimates that 40-60% of the hives around here will die this winter (see, I wasn't just whining all these months!)

Oh man, I feel bad. So bad I am not even working out how much. It's not the money for equipment, the hours spent to-and-from, or even those spent sweating in a bee suit several times in the August heat, spraying sucrocide on 80,000 bees (every box, every frame, both sides, in the sun, three times). Or kneeling at the hive entrance in November, attempting a last-ditch application of oxalic acid. It's how little I can help, how little I know. It is, as well, the part that I do know, which is that Nature places its bets across most possibilities (in cold and hot weather, in rain and drought), but that I made the gamble to put those bees in that apiary at that time, in my care. And they needed me to do it, and I surely wanted to, but it did not work.

The picture above is of the monastery bees, which are still alive, a picture I took while making my own rounds. They look so resolute-yet-vulnerable, there at the edge of the woods. None of the colonies are truly out of the woods, you know, and if you have any pull with the authorities, I hope you will put in a good word for the girls.
Posted by Phang at 9:20 PM 3 comments: