The Benefits of Rolling With It

Beekeeper meetings (like bee blogs) get short on material in the winter, so our last formal agenda focused on "how to roll beeswax candles."

Initially, I thought this would be lame. Why? Because the purist in me knew that none of us individually produce the groovy honeycombed beeswax with which we would work. It is, in fact, the same stuff we buy in order to make frames for the the insides of our beehives. I was, however, mollified (and drawn in) by learning that beekeepers actually contribute their melted wax cappings and so on to "wax accounts" at the supply houses. Therefore, while the wax at hand was unlikely to contain any one beeyard's product, it was a wonderful amalgam of pure bee handiwork from all over.

And the scent is terrific, too. As my friend Alexandra said when she got her candles, "they smell good enough to eat or roll in." They smell like the inside of a hive, actually, and you should take any possible opportunity to sniff them out sometime.

The basics of beeswax candlemaking are as follows:
Remember to trim any wick to 1/2 inch before lighting. Your candles may get a little white haze on them if they sit around a while. If you expose them to warmth, this will disappear.

There are lots of other candle designs around (I used a Christmas tree pattern and some straight pins with pretty heads for mine), but this is the simplest.

But a beeswax candle, like life, does tend to change as it gets older. It gets that homely crust, it don't smell as good as it used to, and it can crack and crumble at the edges. You should go ahead and use your candles, especially during the colder, darker times of the year when the bees aren't around to amaze us.
Posted by Phang at 2:40 PM 3 comments:

One short day in the sun

For the first time this month, temperatures on the roof rose to about 50 degrees F, and the girls took flight. It was a day of much work for them, I think, as well as a bit of a release and relief.

First the more cold-tolerant Carniolans of the Wilde colony appeared, and then (a few degrees later) the Italian bees of Twain made their December debut. They cleared their doorsteps of many dead sisters, and then took to the air.

Bees (unless they are sick) do not relieve themselves inside the hive, so they retain waste until they can get outside. During these cold days, it can be weeks between "cleansing flights." One of the medications that they got this Fall (Fumagilin-B) was meant to help them with the stress of all this: it chews on bacteria that like to live in a honeybee's gut. The picture above shows dots of bee poo on one of our skylights. A master beekeeper once assured me that the stuff stinks like crazy if you get it on you.

It seems that they also come out thirsty. There were bees parked at the edge of the puddles on the roof (we had unbelievably cold, nasty rain just yesterday), sucking up water. There was one swimmer – a worker who may have been swept into the water by an sudden breeze – so I got to sit in the sun with a drying bee for a while.

It's colder than when I did bee-resuscitation during the summer, and the honeybee cranked up a bit like a cold engine. They usually run their front legs over their antennae alot and stick out their tongues while they dry off, but instead of a methodical and furious wringing and patting, this bee engaged in a kind of ssssllllooowww m-ohhhhhh-tion groooom that suddenly sped up when the sun hit her. It seemed really mechanical, but it was just the reality of being a cold blooded life form. Her eyes went from dull to active, and she took off without so much as a backward glance, as bees are wont to do. I hope I see her come Spring.
Posted by Phang at 6:30 PM No comments:

Desperate Winter Pursuits of the Bee-Brained 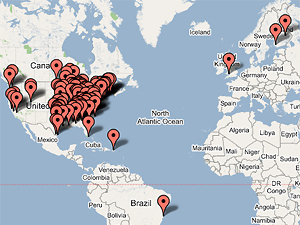 In the absence of the six-legged set, perhaps we bee-o-centric newbies can turn to each other, to share tales of bees past and stake out the territories our industrious girls have so thoroughly explored. In short, it's a hoot to go to the Frappr Map of world beekeepers (just click on the pic), put down a marker that announces your presence, and shout out to others in your predicament. You can even submit snapshots of your loved ones and look at other beekeepers' efforts.

I, for one, wish that beekeeper Linda Houlihan of Albany, NY had posted her email address, because her beautiful, crisp, and enormous photo of a frame of brood has me wanting to purchase every bit of her photo gear (and reshoot this whole blog).

One interesting thing about the Frappr map: there are lots of us new-bees out there. Maybe this beekeeping thing DOES have legs (please forgive me). It's also possible that well-established, experienced beekeepers don't spend as much time online, trawling around for information and free advice. There is definitely a straw hat and farmhouse set out there that needs me less than I need them. By the way, I envy them BOTH the house and the hat.
Posted by Phang at 10:23 AM 1 comment:

After writing so much about the cold, I got some major nostalgia for the warm days just past. When visiting the hives, lots of pictures are taken that never make it here, so I pored over a bunch of them. I miss the bees.

But maybe I have something to show you, even now when there is not a (living) antenna to be seen. A few days ago MaryEllen shared with me a bit of wisdom that I can show you now, with a bit extra besides. 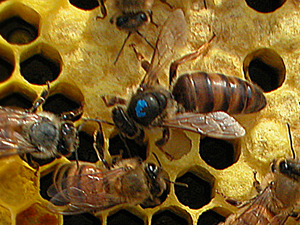 The bee at top is Elizabeth, the Queen of the Wilde colony. That sporty blue mark came from the beekeeper who bred her. If you look at her, she resembles the bees' cousin the wasp more than her workers do. Notice that her broad shoulders have no fuzz, and that her butt is way long and tapered. I think she is pretty. This picture was taken in late May. 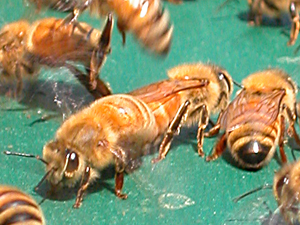 Now, here at the front left is a young worker bee, currently a house bee. After they emerge, bees spend about the first three weeks of their life doing tasks inside the hive. In this picture, it's a really hot day and the girls are fanning up a storm to try to cool the hot insides of the hive boxes. Take a look at her shoulders, where the wings attach. She is all golden and fuzzy! Most of the bees I see when opening the hives are like this: young and occupied with tasks like nursing young, drawing out honeycomb, and putting away honey stores. The girls were fanning so hard because it is still late May, and the BeeCool hive ventilators have not arrived. I think she looks like she is saying "Hurry up already with the AC!" 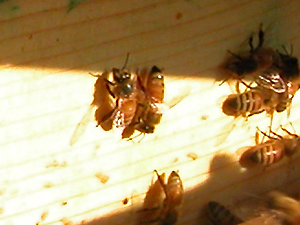 It's not easy to get a picture of an old bee: they tend to be out in the field during the day when I make my visits, and they try to die outside of the hive so no other bee has the extra work of pushing them out the front door when they pass. The bee furthest to the left has probably lived most of her life by now. Look at her shoulders: the fur has been worn off of her back, probably scraped away little by little by all of her trips in and out of the narrow hive entrance.

Recently on one of the BeeSource bulletin boards, some expert beekeepers mentioned that the reason honeybees "wear out" after six weeks is that they lose the ability to make replacement parts once they are full grown. Adult bees eat no protein, just the nectar of plants and honey, after they take flight. The pollen they collect — a particularly pure vegetable protein — is just for the young. The Queen lives up to 5 years, maybe because she is made of more durable stuff and does not do the hard work of outside foraging.

Now they are all hunkered down in a big ball o'bees inside those boxes. I wonder if the work of keeping warm is harder or easier than the other tasks they set themselves. I look forward to seeing them again when the sun shines.
Posted by Phang at 9:03 PM No comments:

Winter is well and truly here: our first snow came last night, leaving a couple of inches and some ice. I went up to peer at the bees, not wanting to disturb them enough to cause a guard bee to detach from the inside cluster. Giving me a piece of her mind could cost her the rest of her life when the temperature is low!

Each colony's entrance now features a handful of frozen bees and frost. The population will dwindle with the temperature, but I don't know what a normal amount of ex-bees would be. The girls brought to ground numbered less than a hundred, maybe not even dozens. But so sad and cold.

To me, the bees are the incarnation of sunlight: lively, golden, queens of the air. Many people I know suffer the darkness of winter, and their spirits tilt downward. I miss the lightness of the bees, I truly do, especially when the only brightness seems to be caught in the crunchy melted-and-refrozen snow.

Turning to the plus side, there were no mouse tracks or signs of rodent incursion. Mice and (ahem) others sometimes get into bee colonies in the cold months to enjoy the comparative shelter and the free food. This seems like a pretty likely threat in the city, but we have beat it so far.
Posted by Phang at 8:08 PM No comments: