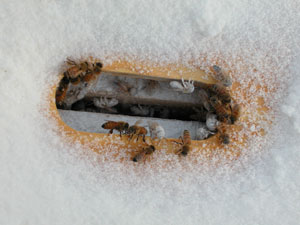 You've seen me going on and one about the two main winter beekeeping issues around here: food stores and mites. This is the most interesting picture I could show you about how I've been trying to look after both.

This is a peek through the inner cover of the Wilde colony on my roof. The bees inside are covered in powdered sugar, and the cover itself is holding about 4 pounds of granulated cane sugar. The powdered sugar is a non-toxic mite control method: the varroa mites seem to be unable to hang onto powdered bees, and they fall off (hopefully leaving the lives of the bees altogether). The bees soon clean themselves off, and get a bit of a snack in the bargain. MaryEllen (the beekeeper, not the colony) points out that this method is kind of like flossing your teeth, though: you need to do it over and over to get much benefit. 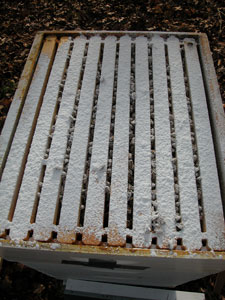 Very soon after sugaring up the bees, white-covered bees began emerging from the hive entrances, though this is just a close up from the top of a hive. To properly apply the sugar, you should remove each box, powder the top, place the next box on top, powder it, and so on. I am afraid to manipulate the bees much in cold weather: I could break the cluster, or expose the queen, or do some other typically awkward thing at a time when the bees have few options. So, for the sake of doing something, I put on the powder and then made another oxalic acid application. 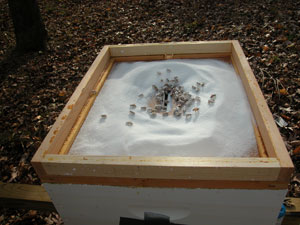 The granulated sugar is a winter feeding method suggested by a beekeeper at the state meeting last month. Bees often stop taking sugar syrup when the temperature reaches freezing, but they will (apparently) creep up on the inner cover and grab some dry sugar when the need arises. You can put a shim on top of the cover, and then place the telescoping cover. I'm a little unsure of whether this is worthwhile, for a couple of reasons. The first is that I don't personally know any beekeeper who does this, and the second is that the bees will need some source of liquid water in order to access the sugar as a food source. This latter is also a concern when offering them fondant (bee candy), however, and I know that they take fondant just fine.

As an example, here are two pictures of fondant. The first is a flower-shaped (broken) brick of bee candy newly placed on the Cockrill hive at the mill. The second is a picture of a brick of fondant MaryEllen put on the neighboring Millard hive a week or so before. Chew chew chew! 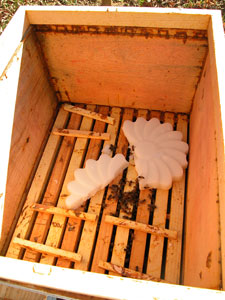 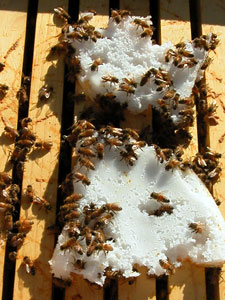 At the state meeting, the most experienced beekeepers agreed about one thing, as winter approaches: after 100 million years, bees don't freeze to death during winter, they starve. We've had warm temperatures, and I have seen bees flying almost every day and only the rarest of flowers in bloom. Though applying the oxalic acid to save the bees from mites will require 15 unique applications, it appears that far more of my time will be spent this year dishing out the sugar.
Posted by Phang at 4:23 PM 3 comments: 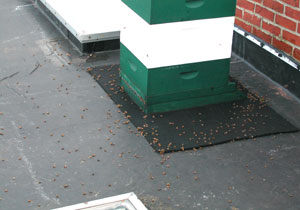 Soon after the new roof was installed, I noticed bee bodies piling up, mostly around Twain. It was hard to avoid the question: "Is the new roof killing the bees?" It was even harder to figure what the solution would be if I have an apicidal roof.

This is going to be one of those posts with lots of questions and muttering and head scratching, just so you are warned.

Initially, the first issue that hit me was that mostly Twain was affected. There were some dead bees around Wilde, but only in numbers that I associate with end-of-the-season dwindling. If the roof were killing bees, wouldn't both hives be affected similarly?

I remembered that Twain, being heavier, took a few extra shots while being moved for the construction, and also that with its larger population, that colony would show dwindling more obviously. However, this was very out of proportion. Was it robbing? David, the pumpkin-farming beekeeper for whom I am doing a web site, says it is always his strongest, largest hives that have the hardest transition to winter, often getting robbed in the process. Whenever I see robbers, I always wonder whether old Queen Eleanor and the girls are still around nearby, somehow surviving wild.

Finally, I remembered that at this time last year came the Time of the Creeping, when hundreds of sick, mite-bitten bees came crawling out of Twain. I "saved" them then by knocking down the mites, but the virus that caused the illness is still in there, mixed in the wax and the propolis and the bees' bodies themselves. With their increased cold weather confinement, was there an epidemic of Paralytic Mite Syndrome (PMS)?

To come up with any answer at all, it was necessary to get more data. The first thing was to sweep away all the existing bee bodies, and determine whether the die-off was continuing. This turned out to be hard to manage, because just enough rain fell at just the wrong time to make it hard for me to sweep around the hives. I needed to sweep in the twilight because waving big sticks around beehives is considered QUITE the provocation during business hours, and any later I would be unable to see a thing. I needed the roof to be dry, or I would just sweep wide swathes of mashed bee around the place – very disconcerting and sad.

My chance came about a week ago, and I swept the dead girls off to the other side. When dealing with dead bees, I try to toss their bodies up into the air, toward the sun, a kind of last flight and a thank you for all their hard work in their short lives. Sweeping them into a dust pan was a heartsore thing.

As of now, it appears that the bee death has stopped. If the roof was off-gassing, either temperature or time has caused that to diminish. If PMS was killing the bees, this month's oxalic acid application has perhaps curtailed its spread. There is still a daunting mite drop. If the dead are actually robbers, the thieving colony has either clustered now or lost too many bees to continue. Our weather has been awfully warm, too, with sudden cool-downs, and it is possible that the bees got caught outside at the wrong time. We had one afternoon when the temperature dropped 40 degrees F in two hours.

I keep wishing that it was more clear what a "normal" year would look like: to have an expectation of when dwindling would occur and what it would look like, to understand how heavy with stores the hives should be, and how much activity I should be seeing. But there is no such thing as a normal year, and urban rooftops are not often factored into your "normal" beekeeping expectations. These weird warm days are actually horrid for the bees in a light honey year like this, too, because they keep flying (and, potentially, trying to rear young) when there is almost nothing for them to forage.

But it must be said that the news is good, though answers are scarce. Whatever killed bees seems to have stopped, and there are still enough girls to make the winter. I will have a job of knocking down mites and topping off stores, but I like having something to do for them.

Light in the Winter 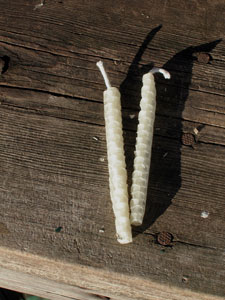 Surprise, surprise: the bees are the lens through which I see the midwinter festivities now, and our celebrations are brightened (even literally) by the bees' presence and presents.

While rolling dozens of candles (pillars, votives, pagan trees...) to hand out to friends and family, it suddenly hit me that I could make Hannukah candles! We usually miss a night or two, so we had enough left over candles to cover about half of the nights this year. It only took about 20 minutes to roll up another coupla dozen more! 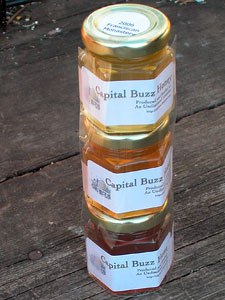 But we have an equal opportunity attitude to holidays around here, so I was also noodling around with bee-based gift baskets, and figured out an interesting way to present the three different colors of honey produced by the roof, monastery, and mill apiaries this year. MaryEllen gave me some special pastry plastic, and I taped together "flights" of honey: the lightest from the monastery, the medium from the roof, and the darkest from the mill. I also labeled some single-source jars for people whom might just like to have a usable amount of a single honey (rather than three somewhat impractical samples). 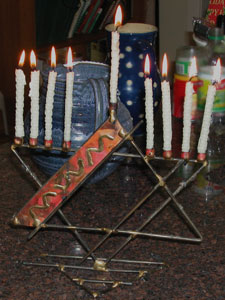 With apologies for the blown-out quality of these pictures, here's our final result. The menorah looked homey and glorious with the beeswax candles, though they did not burn as long as expected. The gift baskets included honey, candles, soaps, and a bag of Honey Pecan "Crackerjack," a first-time thing for me that seems to have come out OK. The recipe is below (with instructions about embellishments in parentheses). 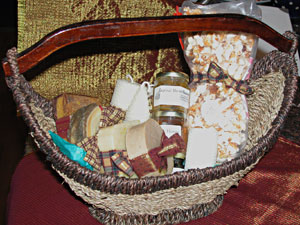 All this craftiness was intended to simplify and refocus this special time, though it must be said that gift baskets are way more time consuming and kitchen-destroying than a trip to the mall. It's hard not to hope rather TOO hard that people will particularly like the effort, and perhaps to get too personally wrapped up in it all. After all, even when the goodies come from the girls, it is not about the stuff.

Melt butter in a saucepan with a thick bottom (burning is the enemy here). Stir in honey until blended, and keep it warm but NOT boiling.

Spread the plain popcorn on the cookie sheets (which I lined with silicone baking sheets, a help at clean up time). Sprinkle the pecan pieces over the popcorn.

Using a ladle, dribble the hot butter and honey mixture as evenly as you can over the popcorn and nuts. Use a plastic or wooden spoon to mix the nuts, popcorn, and sauce until everything is coated.

Place cookie sheets in oven for ten to fifteen minutes, depending. You want the mix in long enough to carmelize as much as possible, but not to burn.

Take crackerjack out of oven and pour into a bowl to stop cooking. When cool enough, begin spooning into ziplock bags, squeezing out extra air and sealing. Tie a ribbon around the bag and you are done!

Makes between 20 and 24 ounces of sweet stuff, depending on how free you were with the nuts and honey.
Posted by Phang at 9:46 PM No comments: