A Late Season Save? 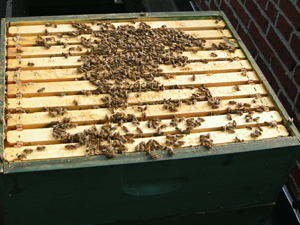 My Romanian beekeeper friend George Tamas (his blog is linked at right, "Happy Apiary") once told me about the benefits of knocking on beehives. Most of you might question the sanity of walking up to a perfectly peaceful hive of honeybees, rapping smartly on the side, and then pressing your cheek tight up against it to hear what you can hear.

Well, the reason is this: during the winter, you don't see much of your bees. And when the temperatures are low, you really should not be smoking them, opening up their home, and poking around. You can very easily kill the creatures about whom you are curious.

One cheap-and-cheerful way to see if they are still alive, whether they are near the end of their seasonal stores, and whether a more intrusive visit is warranted is to knock and to listen. George says he can tell by the type of sound that the queen is OK, and maybe a few other things. Myself, I just listen to hear whether there are a lot of bees, and where they are positioned in the hive.

If I knock, and very clearly hear a big BUZZ, I know there are a lot of bees in there. I can also tell whether my ear is placed somewhere near their winter cluster, where the bees are all keeping each other warm. The position of that cluster tells me where the bees are with respect to their food supply. 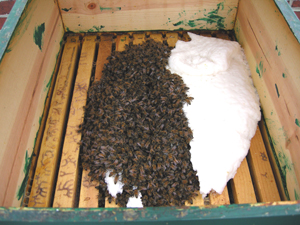 When I put them to bed in the autumn, all my bees were in the bottom box of the stack, and I had placed supers full of honey above them. Because I am the worrying kind, I also put additional food above that. This is a picture of the Wilde bees chewing on some fondant I had put on earlier. 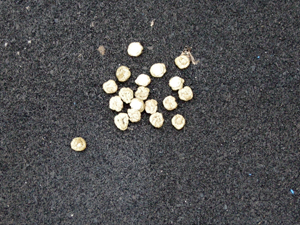 The Wilde hive had been worrying me for a while. There wasn't as much action out the front door as I like, and my knocking seemed to indicate very few bees in any one box, with the majority, perhaps, very high up! I did not see alot of dead bees around, but the presence of some concentrated crow poop meant that the birds may have finally taken to cleaning up departed buzzers, and I could have dying bees without a lot of visual clues.

Don't get me wrong about this: I am very pleased to see this kind of interaction between species. I know you all might expect me to be horrified that anything would eat honeybees, but when you have 50,000 of the girls going into the winter, there are going to be some dead bees around later. If other critters can turn this grim reality into sustenance, this means that the bees have done yet another service to the health of the world.

When knocking on the hives got me to thinking something might be wrong, I decided to do something that no one recommends: opening up a hive just before New Years Eve.

The very first picture above shows you what I found: almost the entire cluster was in the top box. Bees eat their way up all winter: they will not usually go back down for food they overlooked. This means that all those upper-level bees were facing starvation.

Having lost bees in the past, I can tell you that there is some comfort in knowing that you cannot control every force in nature. Disease will sometimes beat you. But I can also tell you this: I will have a hard time sleeping the day that my bees starve on my watch. Disease is tricky, but food is easy.

I don't have many more pictures from inside Wilde that day. It was only 47 degrees F, right at the edge of feasibility, and I needed to get in and out quickly. This is what I found...

The Wilde colony was clustering ABOVE its honey supply. Probably because I had fed so vigorously, they seem to have stored food all throughout the brood area on the warmer days. Bees have a hard time clustering over full cells of stores: it takes extra energy to warm up the diluted fondant, and it creates gaps between the shivering bees. My theory is that on cold days, they moved up over capped or empty cells, and clustered there.

My job was, therefore, to put that top box (and the one directly under it, which also held a bunch of bees) on the bottom of the stack, and move the honey bound boxes back up above. In other words, totally disassemble a winter beehive, reshuffle the boxes, and re-stack them. And a deep full of stores weighs a ton, my friends. Why do I *always* end up stacking an 80 pound full deep box on top of all the mediums? Is Mother Nature that committed to building my upper body strength?

And that really is the whole story. I was paying attention, thank goodness. The weather cooperated a little, as well, and with a little exertion and a few curse words, the bees got another chance.
Posted by Phang at 9:03 PM No comments: 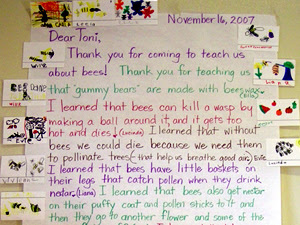 This is officially the "holiday season" around here, a time about which I am somewhat skeptical, but I have already received a terrific gift!

In mid-November, a local elementary school asked me to give a last-minute presentation about honeybees to the whole first grade. I cringed a little: the month had been full of talks to garden clubs, a suburban 3rd grade, a church fair, and … well, you get the idea. I was tired, temperatures were getting lower and lower each day, and the bees were not in a good place to recover from late-season mistakes. So, of course, I agreed to do it. They gave me a late afternoon time slot, agreed to do it bees-or-no-bees, and I began to prepare. Again.

I like to bring an observation colony to school presentations, but late November is not usually an appropriate time. Though the presence of the bees immediately focuses kids' attention, spurs more detailed and insightful questions, and demonstrates concepts in real life, it is awfully cold for opening hives, and it is foolish to even consider bringing a queen along: the workers can't replace her now that all the drones are gone! So I watched the temperatures, and we got to over 60 degrees. I packed up a deep frame of broodnest (without much brood) and a medium frame of honey (nicely full and capped), and took my borrowed observation hive to school.

Where I immediately broke one pane of glass with my car door upon arrival!

But I am finally becoming a true beekeeper, folks! I now travel with pliers and glue and old bed sheets and thumbtacks and window screen and, most importantly in this case, duct tape and printer paper to cover over the cracks. Several worker bees got out, but this time the school was less than two miles from my house, so I know that the girls were able to get home.

In case you were wondering, my husband chronically despairs over the condition of my car nowadays.

So, after arriving with two deep boxes, as well as a bottom board and telecover, and a skep, and bee-pollinated fruits and veggies (including a ten pound pumpkin), and honey samples, and gummy bears (they are coated with beeswax, if you want to use that gimmick yourself someday), and hive tools, and a smoker with fuel, and some handouts, I got to work.

We were scheduled to be together for 45 minutes, but in what seemed a short while I started losing my train of thought. The kids' attention was waning, too, so it seemed to be a lackluster session. There just wasn't enough bee passion in me to make it through November! At that point, however, one of the teachers mentioned that we had been talking about bees for an hour and a half, and the kids needed to get ready to go home.

As we began the laborious process of packing my car up, I brought the observation colony back outside — and groups of parents-picking-up and children-going-home quickly gathered around. No one, it seems, can resist a close look at a honeybee. There were lots of questions, but before very long the first-graders were all about, and I let them answer most of the queries. Way to warm a beekeeper's heart, kids!

Except a couple of weeks later, one of the teachers left a thank-you scroll on my doorstep. If you click on the link, you will get a new window containing my prideful, precious presentation of their lovely gift. My husband and I hung it just inside the front door, ensuring that everyone who visits us would be required to look. :-)

Rock on, first graders! I hope to see you next November, too.
Posted by Phang at 1:16 PM 3 comments: