Happy Bee Day in the Land of Milk and Honey 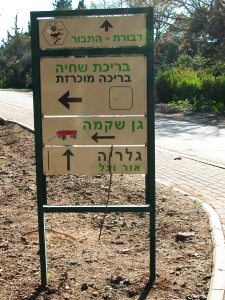 We are in Israel, prompted to another adventure by a wedding invitation, and what is any trip without casting an eye about for bees? In this case, Sam found me a beekeeper who runs a visitors' center for busloads of children, with room for straggling adults like us on holidays and Saturdays (www.tour-galilee.co.il). We took a tour (in Hebrew) with a really good guide named Yasmin, and though we struggled to follow, it was absolutely clear that everyone always laughs at the same part of the presentation: the bit about (ahem) limited role of the drone... 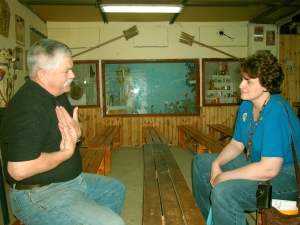 After that, we got to spend some time with Yigal, who runs the place. He has spent much of his life touring the world: he taught shepherding in Iran, and they taught him how to raise silkworms. He was stuck in NYC on 9/11, and is (understandably) reluctant to return to the states, even to see my roof bees. And one other thing: the universal rule that beekeepers will always find something about which to disagree (in this case, the likely role of hybridization on the temperament of Africanized honeybees) is absolutely intact!

He keeps Italian and Australian bees, and they enjoy a much more comfortable life than my girls. There is almost no winter, and the nectar flows throughout the year (though more at some times than others). He's using chemicals for varroa control, but he agrees that making strong colonies is the best control of all. He and other beekeepers in Israel are engages in a planting campaign, adding pro-bee plants like eucalyptus trees wherever possible to increase the nectar flow at low times. When I told him that our flow was so limited, he suggested that we plant more varieties, too — anywhere space could be found. As he said: "They'll kill you for cutting down a tree, but planting one?"

I have an official Dvorat HaTavorah staff t-shirt now, and am engaged to provide three jars of Capital Buzz honey for his educational display. And MaryEllen will be pleased to learn that the gift shop sells propolis mouth wash! 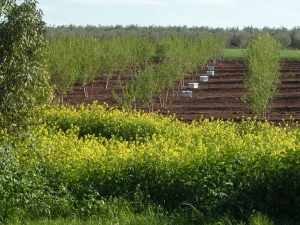 So I was all abuzz, as they say, when we left and were driving through the gorgeous agricultural area of the Galilee. Yigal says that there are about 5,000 beekeepers in Israel, and that they are extremely important for much of the food produced there (think Jaffa oranges). I made Sam pull the car over (and drive it back about a kilometer) when we found this picture-perfect setting for honeybee pollination of a young fruit orchard. 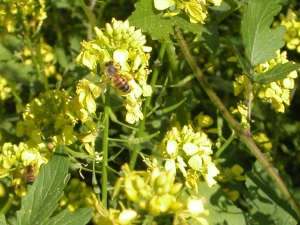 As I took the picture, however, I realized that the yellow flowers all around me were buzzing. These wildflowers, which I'll try to identify for you later, line almost every roadside. In fact, incredible wildflowers of many sorts (including, I think, papaver somniferum) are on roadsides, empty lots, and mountainsides all around the country just now. I laughed to think that the girls had been placed there to work the fruit trees, but were wallowing in the sun-baked wildflowers instead. It's Spring, it's beautiful, and I guess we are all on a vacation of sorts!

You will not be surprised to learn that there are more pictures of the bee center, of honeybees in wildflowers, and bee colonies seen along the road (as well as a random box turtle, rescues from a highway suicide attempt). These will probably be put on a sidebar page when I get home. You know, in some cosmologies, Hell is an endless review of someone else's vacation pictures. Would I do that to you? :-)
Posted by Phang at 5:36 PM 3 comments: 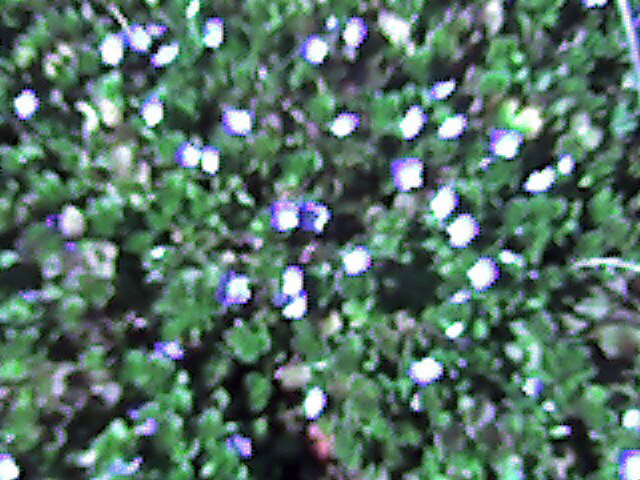 With apologies for the crummy, telephone - photographed image, here's a plant that I think the bees go to, blooming profusely in my neighborhood. No honeybees were here quite yet, but it's a glorious day and, and hope blooms, too. I believe this is "henbit" and that it *is* a bee plant, though I cannot check it just now. My husband and I are on the road again, this time to Israel. I hope to find some Galilee bees, and to see who is flying in the Negev.

In case you were wondering, it seems like the search queries that bring people here now are evenly split between "bee death" and "bee feeding," and I hope you all find what you need here. There are at least two "new" disorders this year, "colony collapse disorder" and a virulent nosema (bee dystentery) but I do not deal with them here, because I have not seen them myself. I can tell you an insight a more conservative beekeeper told me though, a kind of wisdom about this time of year in this type of climate.

The bees truly rely upon numbers, population numbers, to make their worlds work, and rightsizing the number of bees to tne environment they inhabit is a major bee proccupation. What do I mean by this? I mean that it takes a large number of bees to exercise control over the inside of hive -- to make sure everyone gets fed, that the temperature is warm enough, that disease and dirt are eliminated quickly, that new brood is covered, that the queen is tended, and so on. If the bees are in too much space, they may be overwhelmed with work. If they are in too little, they don't have enough resources to support them all or have enough room to get their work done.

But right now, too low a population is the threat. If there is enough family in there, they can stay warm, they can balance their hive tasks among workers, they can avoid frenzy, exhaustion, and disease. There is less stress, there is less disease.

This same beekeeper told me how, a year ago, he found three dwindling colonies in temperatures that were far too cold. He took those colonies, only three or four frames of bees a piece at that point, and popped them (queens and all) into one hive box. Two months later, in much warmer days, he opened up the hive to find all the bees in there, as well as all three queens. To the honeybees, the numbers were everything in the game to survive: joining forces, all the queens laying, god only knows what kind of pheromonal cocktail animating the place. Normally, the queens would hunt and kill each other until only one remains. In this case, perhaps the workers kept them apart. So much for "one hive, one queen" By season's end, it was a normal hive, but not a very strong one. They had all been through too much, and cracked foundations make unsteady buildings. 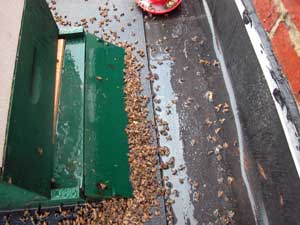 As the weather warms, some beekeepers make see piles of dead bees like this near the entrance to the hive. This is right after a cold cold time, and the bees have a lot of dead sisters to get out of the hive all of a sudden. They usually carry their sisters farther away, but in this case they have to push 'em out quick. This is frightening to find, but not unusual. I hate to show you this picture, but the numbers of people worried about be death make me think you need to see it. I have been in this hive, and monitored its progress over a few more good days, and the death has not continued at least up to now). They are still in there, taking sugar.

Outside my hive that died, the signs of death went on for quite awhile, and much less dramatically. There were few bees around at all when it life ended there. So please baby your bees, feed them fondant and sugar, and look forward to Spring. I hope we al find the flowers that make us hum.
Posted by Phang at 1:52 PM No comments: