I Believe in Living Sunlight 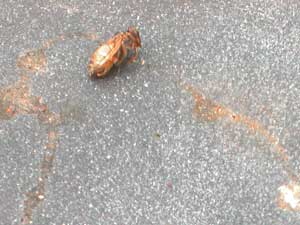 Today I checked my hives after days of hard wind and rain. A honeybee pulled out a young, deformed worker, and dropped her a few yards away. The sick bee moved a little, but had no hope to live. Her sister took no time for pity. I did, but couldn't know whether a short tap from my toe would end her misery or shorten her only moment of sunshine. So it is with bees.

I'm a hobbyist beekeeper, but my companions are a theme of my days. I speak to youth groups, summer camps, and festivals about the miracle and importance of honeybees — how they can plug a jaded urbanite into a world of sun, rain, and blossom. Kids and adults respond with wonder. The bees are the living embodiment of sunshine, dependent on plants and their blooms to flourish, a need which is returned by the wild plants — as well as crops — that depend on pollinators for another generation of seeds and flowers.

In the city, I live like a yuppie but think like a farmer. I know the temperatures of the past 6 months and the forecast for this week. I know how much rain we've had, and how much we need. Since the bees arrived, I've smelled the blanket of sweetness that the linden trees lay down in June. Have these been extra-fragrant years, or did I just never notice before?

The bees are Tinkerbell vegetarians, less than 1 inch long and hanging from borrowed-looking wings. You can see gold sunshine through their bodies, as if the sweetness of honey starts inside. Being a ham-handed mammal pawing through the delicate home of 50,000 bees has underscored the clumsy truth about power: it's impossible not to kill or injure on the way to staving off disease and starvation. I'm wrong from time to time about how to fight those foes. Size and strength are no help in fixing my mistakes, made by clumsy fingers 20 times the size of any bee, by limits on what I can see and understand about their lives.

Bees live in a tight family communities, something many of us crave. Workers that stow honey in May will never meet the December sisters who eat it. Yet the bees are ruthless: the ill are cast out, and the old try to die outside the hive. They can't change how they live, even with the new illnesses and parasites that humans brought. Paradoxically, they need us more, since they can't survive alone. We need them more, too, as other pollinators disappear with their habitats.

Living with honeybees, I see the life force of sunlight streaming through our lives, in sweetness and danger. I don't know if the bees and I are within the cascade of warmth, or if it is in us. But I know we are together just the same, and our very different worlds will have their stories written in the same light.

An explanation for this essay:

One of the public radio networks in the United States regularly runs a segment called "This I Believe," where listeners can contribute a personal statement of belief. The program hopes to get people thinking and talking about faith and belief, during these times when we are all so likely to tear each other apart over these subjects. Friends have suggested, from time to time, that the honeybees are an appropriate subject for such an essay from me, and I resisted until now. I've learned as much about what I don't believe as about where my faith resides, you see.

So I uploaded this essay, "500 words or less," and realize that it's a poor fit. Like a beekeeper with a particular way of looking after the hives, these folks have a unique project and a specific method in mind, and I did not follow the directions. But I am glad I did it, anyway.

Maybe the best part is this: after your no-more-than-500-word submission, they give you 800 words to reflect upon the exercise of writing your belief statement! This, my friends, may seem silly — but it is actually quite cool. This is what I wrote:

This is not the first time I have written about bees: they seem to provide the doorway to a deeper understanding of how to be a unique, living being in a nonetheless teeming world. I go back again and again to learn what I really think and feel and sometimes to change my mind.

Politically, I am a biased person, but the bees actually make me confront some of the principles I hold for convenience and comfort, rather than for the sake of truth. It splits apart the relationship with truth and false faith, where you cleave to a belief for reasons other than thinking that the force of life within you really supports it.

"This I Believe" was a necessary activity for me because it made me confront so many things about power and responsibility and limitations and life and death in this little community where my role is so important but not omnipotent. I cannot love the bees without accepting their brutality, I cannot understand the cruelty without the beauty. How else can a person understand themselves?

The Bumpy Launch of Spring 2007 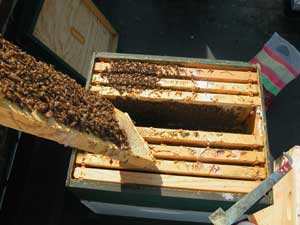 Sorry that it has been a while folks, but as a local apiary inspector told me in a (late) email this week, it's the time of year when beekeepers tend to be digging in beehives, not tickling mice!

So, you all might be keeping score already, but let me sum up where we landed in March 2007:

We returned from travel on March 17 (sometime, perhaps you can ask about the charm of being in Newark Airport during an ice closure, and how you can end up returning from Israel on the train!) By March 25, all four surviving hives had been surveyed (as well as a couple belonging to my friend Jane, who was worried about hers). MaryEllen, Doug and I had installed four new packages each at the mill. To clarify, I am a godmother of 6 honeybee families now: 2 on the roof, two at the monastery, two at the mill.

On March 20, the roof bees were simply marvelous. The year had truly begun, with both queens laying and abundant new brood. The picture above shows nurses covering new brood (no close ups, sorry: the camera ran out of gas). It seems that my constant desire to feed them left them very well stocked for the Spring, too: there was almost a medium super's worth of honey throughout each hive. I saw no bees with deformed wings, and lots of bees flying in and out. * Happiness * 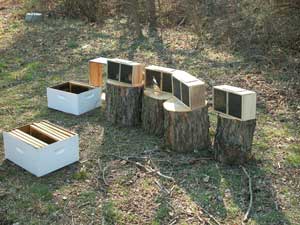 On March 25, we did a simple thing that should not be overrated: we installed 4 packages of bees! Jane (another club member, who worries way too much about how she handles her bees) came along to help and to get more experience. Watch the sidebar for a detailed run-down of how we did it: I messed up a lot less than I did two years ago! My girls went onto drawn comb left by the deceased colony: this should help them get a much quicker start because the queen can begin to lay right away, and there is already honey in the hive for nurses to feed the young. MaryEllen checked a couple of days later, and said it all looked like a living apiary again. I will name one of the hives "Cockrill" again (hey, no superstition here) but am currently stumped for the other hive's name. I'm thinking about perhaps the current miller on the site...

The question at the monastery was more complicated. Both colonies were still there, but something had gone wrong with the queens. Both were laying only drones, which means that the queens had either run out of sperm or that their reproductive organs were not functioning right, and the colonies were going to collapse if a fertile queen were not introduces soon. But there were no queens to be bought, and Larry, the most experienced beekeeper I know, said I would be lucky to find queens by April.

While I was in the MaryEllen hive, I even saw the failed queen: she looked fat and beautiful, but she was not the marked beauty that was there in the Fall. Her daughters may have superceded here due to some hardship during this weird winter. If so, she did not mate. Could this have happened to BOTH hives? Larry said it was truly strange. Could it be an affect of the oxalic treatment in the fall? The roof bees got the same, and came back strong. Oh mysteries, and second guessing, and so little to do about it anyway.

But, as usual, I was saved by MaryEllen. She had ordered (WAY ahead of anyone else) queens for spring requeening of her hives, and she still had two left. And said I could have them, if I replaced them when queens became available.

Like before, I found the queen of the MaryEllen hive right away, and (quite terribly) had to kill her. I hesitated to do it, and set her aside in a box, but when I turned back to her, she was trying pathetically to climb back home. So then I did her in, and buried her near her hive. There is something heartwrenching about this task of killing a helpless being, who bore no fault for her state. Yet a healthy colony would do the same to one of its own. This is little comfort, and maybe comfort should not be had.

I placed the new queen, who came in a plastic cage that was way odd to me, and the girls freed her in three days. I will be visiting this week to see how she is doing. She has a yellow dot, and I am trying to work out a saintly name for her. Suggestions welcome!

The Doug colony was hard, hard, hard by comparison. The first time I went in there (and discovered all the drone brood) I had dropped a frame, and throughout that visit — and the next two! — I failed to find the queen, looking at each side of each frame, going in and going out. I began to freak, since I needed to be sure that there was no queen if those girls would ever accept a new one, but I had no way to make certain of the fact!

MaryEllen rescued me again. She suggested that I make a little nuc in a super with my new queen (still caged) and some bees and frames from one of my strong roof hives. They would free the queen, she would lay down her fertile-mamma mojo, and MaryEllen and I would visit on the next good day to see if we could find a queen below, and if not, to unite the two groups. She is quite the smarty, that one.

Of course, the weather has turned cold again, so I probably cannot get in again until Monday (5 days from now, and 12 since my last visit: much longer than planned) but I have hope for both colonies.

And more news: at least one other beekeeper will be joining me at the monastery, a direct result of the girls' presence there this year. Let us all praise Spring, the renewal of life and friendships, and time in the sun for people and bees!
Posted by Phang at 11:37 PM 6 comments: