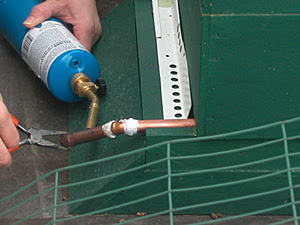 On Sunday, my husband helped me apply the second round of oxalic acid treatments to my varroa-mite infested colonies of honeybees. We were actually a couple of days overdue, because the whole idea is to time at least 3 different treatments to catch every cell in the bees' brood nest at least once while it is open. This is an actual real-life picture of me with my genuine propane torch doing the deed. You can see a movie which demonstrates the low flame and positioning in either Quicktime (.MOV, 5.5 MB) or generic (.AVI, 2.7 MB) formats. 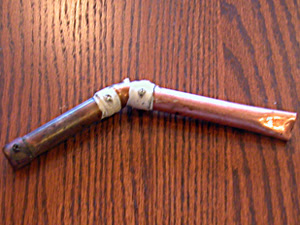 In case you are wondering what the copper thingum in my hand really looks like, this is the version I whipped up from bwrangler's specs. It has been used a few times, and I am a little bent out of shape about fumes, so I put extra teflon on the outside of the joints. This was whipped up from less than $5 worth of pipe scraps and caps from the hardware store, and $5.88 for a pound of oxalic acid, more than I will need in a life time.

Why repeat all this treatment stuff?

Whipping up a batch of baby bees usually takes about 21 days, and the whole first part of the beekeeping short course seemed to be all about these stages. Unfortunately, I sat there hearing "blah blah blah," thinking the important stuff was coming later. Um, this was the important stuff though.

You see, I can only treat bees that are either already hatched, or in the first phase of being hatched, when the bee egg's comb cell is still open. The order of operations is that the queen comes around, drops in an egg, the nurses feed it lots for a while, and after about 8 days they come by and seal up the cell for the "cocoon and pupa" stage. And varroa LOVE it in there. None of the medications for varroa can get through the beeswax capping, though.

So, to ensure that the whole colony gets treated, you end up doing a bit of bee biology math. We know that it takes about 3 weeks to bake the average bee. We know that each bee only spends about a week developing in the open. Therefore, each bee spends about 2/3 of the hatching cycle, or two weeks, unavailable to me. So on any given day, only 1/3 of the cells receive my ministrations. So the calculator says, if you are giving a treatment, you need to repeat it 3 times at one week intervals to even hope to cover all the bees.

After treating the bees this time, I slid in clean sticky boards at the bottom of the hives, and will count three days' worth of dropped mites tonight. I'm not sure what to expect, because there might be lots of dead mites because of the treatments, but there might be fewer because many have already been sent to the great pestilential arachnid playground in the sky. Probably, the best approach is to take a count after each treatment, and then a little later. If there is one thing that beekeeping teaches, it's to try to get a longer term, more integrated view of the goings on, rather than trying to read the truth from adrenalin-producing snap shots.
Posted by Phang at 11:20 AM