Let's Not Split Quite Yet 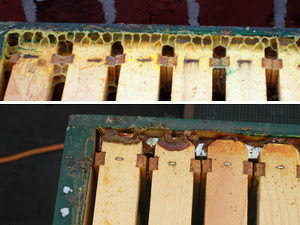 MaryEllen came over yesterday to help me find out if the Carniolan bees of my Wilde colony were on the verge of swarming (due to crowded conditions and, perhaps, overbearing mothering), and we went through all the boxes of both colonies, all the way down to the bottom board in the case of the Twain honeybees. She came bearing gifts of extra brood comb and hive covers and stands and bottom boards...she came riding to the rescue like those knights in shining armor of which little girls dream.

But a lot like little girls who dream of heroes, however, it seems we did not need much rescuing after all — though a helping hand (and a knowing eye) still makes the day.

We opened up Wilde first, working our way down to see if they had built queen cells beneath the top brood box (the second box from the bottom) and MaryEllen spotted only two empty queen cups, no source of alarm at all!

We also saw bees, frame after frame after box after box of bees! Carniolan bees form a winter cluster (to keep warm) which is smaller than any other, often only a bit larger than a softball, according to the experts. I'm thinking we were seeing something more like a small beach ball in there. I slipped a semi-empty frame of comb into the middle of the deep box above the brood nest, so Queen Elizabeth could have a place to move up and lay some more eggs if she wanted to.

We also saw honey, loads of it. MaryEllen says I should stop feeding the bees, at least for now. It appears that I overfeed my bees just like I do my dogs and husband: a preferred vector for nurturing.

So we turned to the Italian honeybees of the Twain colony. They were slightly more cranky, because they prefer slightly higher temperatures. Once again, lots of honey, lots of bees. When we reached the bottom of the colony, there was brood (bees-to-be) in the second and third boxes from the bottom, but none in the last: the queen had moved up, as they tend to do.

I had the option of taking out the box and having a a whole medium super of my very own drawn comb to use later for a "split" (to start a new colony split off from one of the first ones) or perhaps placing it on top of the brood nest as a place the queen could move into. MaryEllen cautioned against that, saying that until the weather got better I should not put any kind of separation between the bees and their honey stores, and she was right.

So now I have a box of comb stored in the basement, ready for later adventures — and MaryEllen did not have to lend me any of her precious reserves (though she is always terribly generous that way). She told me I should be singing from the rooftops, with two strong and stable colonies more than halfway through the winter, with new bees on the way and a promising new year ahead.

I'm still a little nervous about the future, because it appears that I will soon need to make those splits, and become the mother of 2 more colonies in addition to the one which will be part of a project MaryEllen and I will be doing at a park outside the city. Did I tell you about that? Well, maybe next time.

Finally, today's picture is a comparison of differences between bees. The top picture shows the front top edge of one of Twain's boxes, on the side facing the wall. The girls have made lovely lacy comb out of beeswax in order to weld those frames in place. The bottom half of the picture is similar work, as done by the workers of Wilde. They cement the front edges of the frames in place with lavish slavers of propolis (the stuff in the picture has already been pried up). Just like two different smart people, they tackle the same problem using preferred tools and practices. And no book can tell you how your particular bees are going to be(e).
Posted by Phang at 3:49 PM