Well into my fifth summer of beekeeping, here's the report: I have become the person about whom I used to scratch my head.
Back in 2005, soon after we finished the beginner's "short course," our club sponsored a field day at an orchard apiary in Burtonsville. Just as a coupla dozen students and maybe 6 experienced beekeepers closed up the last hive, a swarm from somewhere else began to settle in one of the trees under which we were standing.
OK, so this is one heck of a coincidence! It was also quite a show.
Before any beginner hive-minders could say, "Um, what?" middle-aged beekeepers sprang into action! Some ran for ladders, some ran for hive parts, one grabbed (I kid you not) a small saw, a 50 foot rope, and a bedsheet from out of his car (just happens to keep them around: don't you?) Another started dinging two pieces of metal together: an old wives' tale says you can get a swarm to settle if you bang pans.
A father of three soon sprang 20-feet-plus up the side of that tree, from which he sawed off a limb with a large swarm on it. Compatriots caught the branch in the sheet, and then set the hive entrance near the swarm. David, the tree climber, was down in a flash, and picked the queen out of that mess of bees and saw her inside. Swarm hived!
Four years and a bit later, I still cannot pick out the queen from a loose mass of bees, but I nonetheless hardly recognize myself. I've caught three swarms this Spring: one mine (*sigh*), one at the White House, and this one.

I actually object to the title for this post, but it is hard to find a better way to put it. Compared to the story above, the craziest thing about my adventure was a 20-mile trip across metro Washington at rush hour, though the decision was based merely on a non-expert's assessment that a whole lot of bees were hanging out in a convenient bunch right at eye level.
The thing about swarm-catching is that non-beekeepers always say the same few things:
The usual case is that it is either yellowjackets, there are only a handful of bees, or they have disappeared by the time you arrive.
In spite of this track record, why did I drive to Reston on June 8 at 5 PM with two sets of bee catching gear (a nuc box for a small swarm, a deep hive body and all the trimmings in case the size was as-billed)? Three more things:
The picture of me, above, shows my ungloved hand, near my unveiled head, featuring an uncensored smile, next to a honking huge swarm of bees that somebody out there must sorely miss! I was able to pull my car up within 6 feet of the swarm, which would be considered "shoulder length" if we were all at the hair salon!

Here you can see the whole set up: there I am with my bed sheet on the ground, my clippers in hand, my hive body at the ready. Yes, I had most of the stuff in the car before Karen even made the call. I was hoping that, since it was after 6 PM by now, that most of the bees had returned from the field. I sat around for a while making sure that everyone was heading into my hive body, but it turns out that another couple thousand bees returned later, and I came back the next day to get them, too.
Because my two new Monastery hives are not doing well, I thought about bringing these bees all the way into the city, but I decided that they belonged out at Colvin Run Mill, all things considered. When I got them there, I peeked inside to be sure all was well, and the bees were already festooning all over the place, beginning to draw comb and make themselves at home. When I brought their laggard sisters the next day, I also brought another hive body and some feeders to help them along with all that wax production.
All in all, I would have done better to leave my capture hive out there that first night, returning back during early early rush hour the next day to ensure that I got more of the bees all at once. I feel sorry for the scouts that got left behind, and hope they managed to wrangle their way back into their home hive, or some other.
And the back of the car in the picture above still houses a small saw, pruners, a bed sheet, and a transportation strap. Just in case, you know?
Posted by Phang at 1:11 PM 1 comment:

No Such Thing as a Solitary Bee 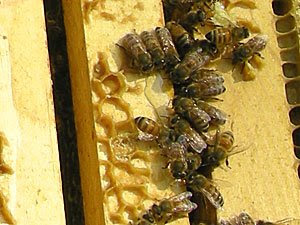 Ok, so the truth is that there are lots of solitary bees, but they are not the honeybees that have lived and worked beside people for millennia. Why mention this? Because here in my no-longer-secret hometown, my picture is on the front of an article about beekeeping. I'm glad I'm in a veil, because I would never have had the opportunity to even open a hive without the help and friendship and wisdom of many others, and perhaps a few can be imagined in my place instead.
Some of them are beekeepers who are ready to tell others all about it, others enjoy a more private relationship with their bees, but it is a rare beekeeper indeed who does not rely on his or her connection to the rest of our community.
I like to tell people new to beekeeping that there is no such thing as a solo honeybee: a bee on its own is simply doomed. The dependencies are deep and complex: all the bees depend on the one indispensable Queen who is their mother, but she is the most helpless bee of all. The workers, who make the whole hive run, have nowhere to live and no food for the future without the existence of thousands of sisters back home who build and clean and guard and feed all day. Those lazy, fuzzy, funny drone boys cannot even feed themselves when their sisters close the doors to them.
And so many of us have opened our lives to them, some of us because we want to connect with our food supply, others to save the bees who are so essential to our agriculture, some for the love of honey, and some for the love of the green world around us.
Whether we planned on it or not, one of the windows that the bees seem always to open looks out on a world of natural miracles and wonder. And worries and responsibilities and joy as we try to help them thrive in a world that seems just packed full of challenges and threats and flowery opportunities.
Newspaper articles appearing now will perhaps make many more thousands of people aware of the bees on my roof and in yards and in flowers all over this city. My own personal hives have never been so exposed, and I hope I have not done wrong by them in sharing them with you. We live in a world that is full of fear, and I can certainly understand why something so unknown and seemingly out of place could cause concern. But we are in so much more danger without ties to the world and each other, without a community to turn to and ties that reach all the way into the world of bugs, plants, and critters.
I cannot tell you how good it feels to have a relationship that links me to a world of flowers and sunshine.
Posted by Phang at 9:54 AM 12 comments: