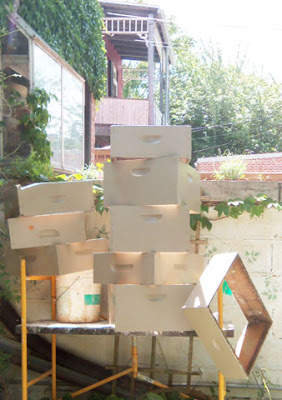 There is a terrible joke that goes with the title of this post, but there is a less humorous strategy behind the color choice. This year's color for woodenware matches the shade used for Rubbermaid garden sheds and that is no accident. It's a strategem for "hide in plain sight," one of many means a large number of us use to integrate beehives into complex, populated areas without either sowing fear or surrendering to ignorance. I do not feel that my fellow citizens need an "in your face" introduction to beekeeping, and truly believe that behaving in that manner will hurt all of us (and the honeybees). But the bees can make major contributions—and knowledgeable beekeepers can continue to learn and grow—in many locations where "out of sight, out of mind" is not an option.

This blog has languished for the same reason that urban beekeeping can land in a load of trouble if beekeepers are not careful: lack of equilibrium. Every sustainable habitat has one—a unique combination of opportunities and compromises for life that works across different co-located populations, season after season. Ever since starting as a beekeeper, I have tried to hammer home that anyone who really cares about the bees has to make sure that they are good neighbors through insightful and attentive management. I am gonna yammer on about the beauty of that a bit more. An example of what I mean: As anyone who ever had to maintain a house knows, water is both a good thing and a bad thing. Water is a basic input of life and health, and a break in service would be a major crisis in most American homes. Water is also insidious, insistent, and a relentless finder of gaps, reservoirs, and interactions with the substances all around us. Water out of place is also an emergency.

Living things are like water to the third power: your honeybees are not only pollinators and progenitors, they are constant explorers of the surrounding ecosystem, looking for forage and future home places and water sources and, sometimes, other bees of whom to take advantage. They are dynamic, intelligent in ways of which we continue to learn more each year, and dedicated to the pursuit of that ecological niche that will help their family grow and prosper. This means they may be tempted to swarm in your neighbor's yard, and then move into her/his attic. They might be prefer the water fountain at a park on your block. If they get into a robbing frenzy, the pheromone in the air can lead them to sting unsuspecting creatures. It is your absolute responsibility as a beekeeper to work against any such possibility, and to remediate any situation that develops, whether its your bees or not. In fact, one reason to have urban beekeepers is to make sure that some of them are around to address situations like this that do happen with feral colonies.

You can now buy a beehive from Williams-Sonoma (with no bees, thank goodness), and there are "services" in most major American cities that will allow you to order a hive with bees in it to be delivered. People think harder about buying birdfeeders, I think.

But people can be crazy cool, too, and I think many are just trying to be on the right side of protecting the pollinators. We were called to a construction site near Nationals Park a couple of weeks ago, and the site supervisor stopped work, and eventually moved us beekeepers around in a front end loader, in order to hive a swarm that had landed on some heavy equipment. ALl the guys on site did everything they could to help. I got a call for a bee tree in Upper NW last week from a guy who was just passing by as a crew took down a dying maple that turned out to have 50,000 bees in it. A beekeeper friend came running to help, another turned up with a pickup, and two others helped me take apart the trunk (chainsaw lessons!) and hive the bees next day.

Ask me offline about the Planned Parenthood swarm though!

The bees' pursuit of living places and forages is their search for equilibrium, and my efforts to educate DC beekeepers and rescue as many good Apis mellifera genes as possible is mine. Some opportunities always do get away in the complicated, multi-variable natural world. But I think a lot about something called "The Nash Equilibrium," which is a theory that, in multi-player environments (meaning anything from real life) the situation is almost never "winner take all" or "you win, I lose." It means that there are usually multiple points where well-being is optimised, and our job as the cerebellum-rich species around here is to try to identify and get to those.

That means making honeybees at home near people who do not necessarily want to know about them, making green spaces flourish even when its a low priority for many members of the community, and making people who generally support beekeeping understand where the amount of time and attention they can afford to share works toward balance and peace for us all.