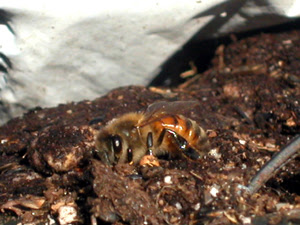 Want to know a dirty little beekeeper secret? Bees prefer mucky water. Yup, they gather nectar, pollen, tree sap, and H2O to bring back to the hive, but they take the latter from the yuckiest place they can find. MaryEllen told me that an expert once claimed that the bees were trying to gather protein with the water, but I have my doubts.

Since this is the city, my garden is mostly containers, and many of those are "Earthboxes", biggish boxes with black plastic covers that keep water in and weeds out. The tomatoes that once grew there are long gone, but the honeybees have converted the openings in the covers into places of pilgrimage. On almost any above-40 degree day, I can pull back the cover and see some girls sucking dirt. 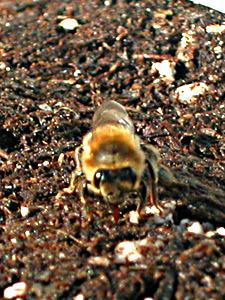 Can you see the little red tongue of the bee at right? It took 20 shots to get that for you (fuzzy as it is). Gotta get my viewfinder fixed. My bees are clearly somewhat soiled, in a couple of ways.

It is extremely comforting to see the bees, in this case almost certainly the cold-weather-loving Carniolans, around and about the yard, not just because they anticipate Spring. At a state beekeeper meeting last Saturday, there was a lot of advanced info around that once again put a scare into me. This blog has more crises than a bad soap opera, and I am afraid that the meeting will only induce more of the same. Like someone who sees a medical show on TV and becomes convinced that she has a terminal illness, the talk of mites and viruses has me shaken up about the girls. Again.

My mite counts are very, very high. The treatment I used is not proven — while it was the best available alternative and one clearly used by a bunch of us (gathered in a group like giggling high school girls, "Did you use it, too?! Tee hee!"). Add the concern that it might be too little too late! One presenter talked about a truly scary relationship between high mite counts and terminal loads of deadly viruses that go on and on even if the mites don't.

The wing deformation that I showed you earlier is not a result of just plain old mite vampires, but of a virus they deliver to the poor developing bees. Apparently almost every bee has some of it (and every part of the hive except the wax can harbor it), but the mites appear to do a one-two punch: The deformed wings don't come from varroa mites, they come from the "Deformed Wing Virus (DWV)," and you don't see it unless the infection rate is very high.

It seems to work like human epidemiology. Name your bad infection (SARS, Spanish influenza, the plague, anything): all were present in the environment, perhaps for centuries, before becoming epidemic killers, or even getting a name. If the numbers of ambient infective agents get high enough, some diseases can make the jump from rare disease (or benign chronic bother) to rampant pestilence. It take billions of virii or bacteria, and hundreds or thousands of potential hosts, and they all need to be closely associated. At some point, a saturation point is reached or a mutation takes place, and the disease explodes.

Varroa mites operate in a large and crowded place full of life, a hive, an easy place to get into the disease delivery business. If you keep the numbers of the varroa low, the amount of virus they pass around never hits the critical mark. Once you have enough virii in place, though, you don't need the varroa around anymore to support the epidemic. The DWV virus can jump the rest of the way up a hyberbolic curve all by itself, and there is no cure. You lose the bees and all the hive products — anything that can't survive a fumigation —because all the bee accessories are now full of virus, too.

I completed a 4-day mite drop count this afternoon. Twain dropped 97 a day, and Wilde is back up to dropping 237. I have a lot of mites, still. During the last warm day (February 16), I saw many dozens, maybe hundreds, of girls with deformed wings creeping around the roof. The speaker at the meeting told us that the deformed bees only live 2 days, so (counting back 21 days plus or minus 48 hours) I know that they hatched on either February 15th or 16th, and the Queens laid the eggs from which they were hatched around January 25-27. These bee larvae should have been exposed to the first oxalic acid treatment (January 27): their honeycomb cells were still open. But they say that the oxalic takes up to a week to kill the mites once it is in contact with them, so it might just have been too late for this generation. The mites could have delivered the virus THEN died.

From the information that the speaker gave, and the many observations of creeping bees and medical mysteries that you can see in this blog, a kind of story line about the health history of Twain and Wilde is emerging.

Last year's weather was great for mites, and stimulated brood rearing until quite late, and the temperatures were too high to use my chosen treatment. I helped this along, by trying everything in my power to raise the number of bees in the Wilde colony before winter. So a really wonderful and prolonged breeding ground for mites was provided.

It was hot right until the temperatures began their drop in late September. The rapid change hard up against the start of winter weather meant the hives were exposed to the mite treatment for only a minimal time. Also, let's not forget the beginner errors that I almost certainly made. So the mite treatment took place under sub-optimal conditions.

Winter usually puts a temporary stop to brood rearing, and knocks down mites. A mild winter here, however, caused it to start up again almost immediately.

With a large initial population, few checks, and a return to pro-mite conditions, the varroa population exploded. The creeping bees I saw in November and again in latter weeks are the effects of the virus ramping up behind the mites. The first wave of DWV girls came when the inital varroa population crested in October, the second when they swung into action in January.

This is the story so far. The ending has not yet been written.

Two weeks ago I still had a lot of vibrant bees. The only question now is whether the oxalic acid nailed the mites, and whether it did so soon enough to stop a viral implosion.

I think there is hope. Some of the dirty bees in today's pictures were very young, newly hatched, and decked with perfect wings.
Posted by Phang at 3:58 PM

Just a note: bees were about today, and while a couple crawled in through cracks in the skylights, no deformed wings were in evidence!

The bees that were out were not newly hatched, I think. New bees don't fly. They start out as nurses and house cleaners. That's good news. It means that some of your older bees have flight worthy wings.

Thanks for the pictures! "Show me" is a great advantage over "Tell me".

Image tip:
Give "Hello" a try. You will love it. Your images are hosted for free. People can click on a small image and see the full sized one. Rescaling is automatic. No hassle. "Hello" is a partnership between Picassa and Blogger. Once you set it up, you will never go back.
http://www.hello.com/